Katie George’s career, which started off as a successful volleyball player before she became an ESPN sportscaster, has only become better with time. This is reflected in her pay and net worth as well. Her affiliation with ESPN is more like the cherry on top of her successful professional life because she already had a strong resume before beginning her broadcasting job.

What is the Net Worth of Katie George? Salary, Earnings

Her excellent reporting at ESPN has already put her in a good position, and it doesn’t seem too long before she becomes one of the network’s leading reporters. She has a promising future ahead of her, but she is already well-paid given her years of experience and commitment to her job.

Katie George is said to earn roughly $50,000 per year, which is within the range of the average reporter’s pay, according to many sources. Additionally, as a well-known television personality, she frequently promotes products on her social media pages, which further increases her outstanding net worth. Katie, who is only 27 and has a successful career, is surely an inspiration to many. Her life also appears to be flawless because of her blossoming love life.

If you didn’t know, Katie George, who is 27 years old, is already off the singles list and about to start a new exciting chapter in her life. Paolo John Prince DelPiccolo, her longtime boyfriend, proposed to her in 2020 while holding a ring in his hand.

Since the proposal, Katie and her boyfriend have kept their personal lives quiet. But even though they haven’t yet revealed they are getting married, it doesn’t seem too far off. So let’s just wait it out and keep a careful eye on the couple’s social media accounts because the next big news could come at any time.

How did Katie George start her Professional Career?

First of all, Katie has been well-liked since she was a popular volleyball player in high school. Since her time in high school at Assumption High School, she has always displayed exceptional volleyball talents. Katie won the Prep Volleyball National Player of the Year award while competing for the school’s volleyball team.

She kept playing the game with a zest throughout college. Katie joined the University of Louisville and competed for the Louisville Cardinals women’s volleyball team. She was named the 2015 ACC player and setter of the year after playing volleyball all four years of college. In the same year, Katie earned a degree in communication and sports administration from the institution.

She also received the prestigious title of Miss Kentucky USA 2015 in that same year. She has won a beauty pageant, so yes. The all-around prodigy, however, gave up volleyball as soon as she received her degree and began exploring her options in broadcasting. She was first a reporter for WDRB. Later, she visited Fox Sports Wisconsin to watch Milwaukee Bucks coverage of the 2018–19 NBA season.

She joined the ACC Network in 2019 and participated in multiple coverages as an ESPN sportscaster when her reporting at Fox came to an end. When discussing her experience with the network, she added,

Being a former female sports athlete and Olympian, I hope to be able to share those tales as much as I can with the ACC. I believe that’s what the ACC Network found intriguing and exciting about me when they were looking to acquire talent. 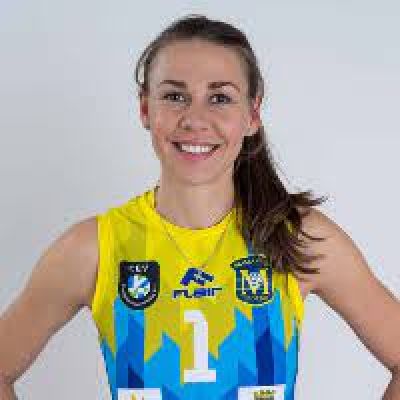